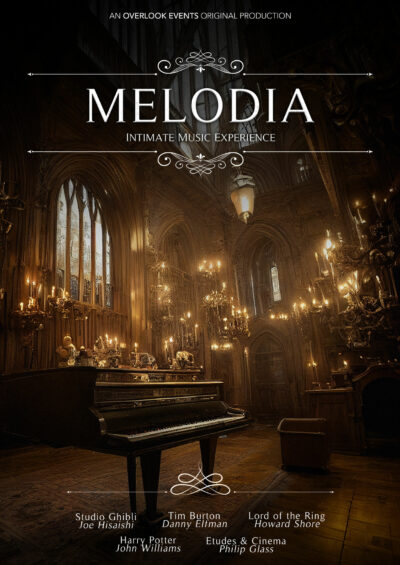 Melodia is a brand-new intimate concert experience created by Overlook Events, production based in Paris, specialized in developping musical events with a great qualitative added value. After many successful orchestral concert with popular licenses such as Assassin’s Creed, Tim Burton’s movies, Ghibli, Dragon Ball, Saint Seiya and John Williams’s movies, Melodia is a new kind of experience with small scale concerts for intimate and precious musical moments with remarquable artists.

Melodia will bring you into magical recital, arranged by music specialists and performed by amazing handpicked musicians. Different programs will be created in the next years, and will join the existing performances, each one focused on an unique universe: Harry Potter, Lord of the Rings, Ghibli, Tim Burton’s movies and Philip Glass’ marvelous world.

The Complete Etudes
of Philip Glass 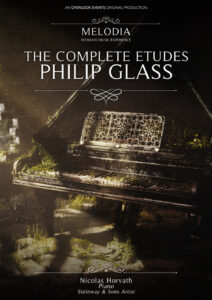 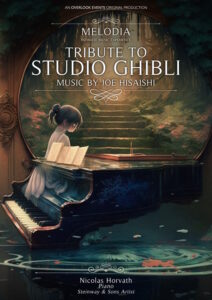 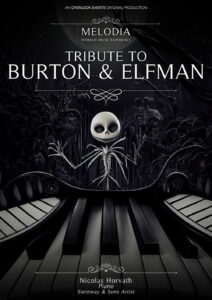 Tribute to
Lord of the Rings 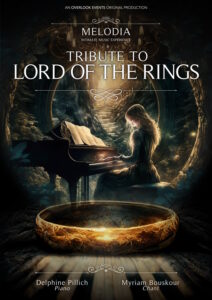 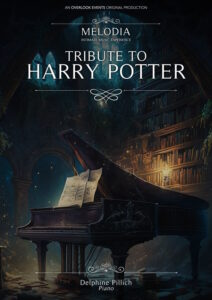 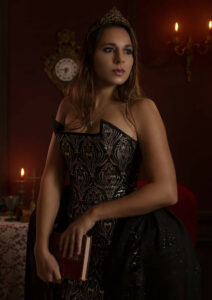 Myriam Bouskour began music as a child by learning the piano in a conservatory, which allowed her to hum her very first notes while accompanying herself on the instrument. At 19 she discovered her lyrical potential. His teachers are Birgit Grenat, then Lyrissa Toscanelli (from the Lyrical Workshop of the Opéra Bastille). A few years later, the tone changed from light soprano to lyrical and dramatic soprano.
In 2011 she decided to embark on a professional career in opera, and won a mention at the competition of honor of the professional union of masters of singing in Paris, a few years later a 2nd prize at the Conservatoire in Superior level in 2014, a 1st Conservatoire prize in June 2015 and to finalize a Perfectionnement prize in 2017.

In the summer of 2015 and 2017, she took on the role of Lyrical Angel in Sylvain Michoux’s “La Citadelle des Anges” show, and began singing in high flying at the from this show and integrates in 2019 the role of Diva Yolande in the show “Mars est dans la Terre” and the role of the metronome in the show “Time” in 2021, moreover also gave performances in 2016, 2017, 2018 in the same production.
Currently, participated in the creation of a Semi-professional Independent Choir, “Cinephonia” and her participation in many concerts as coordinator, choir member and soloists such as the official Ghibli concert, the Danny Elfman concert, Gladiator in Concert, The Lord Of the Rings in concert, as long as her concert creation with Cinephonia, Emajinarium: Odéon. 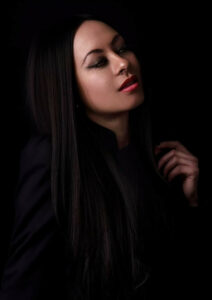 Born into a family of Polish and Vietnamese musicians, Delphine began playing the piano at the age of 9 in Asia. Upon her return to France, she studied at the Conservatoire under the teaching of Célimène Daudet and Bruno Robilliard where she obtained her Piano and Chamber Music prizes.

During her musical training, she received precious guidance during the Master Classes of Jean-Marc Luisada, Cyprien Katsaris, Vahan Mardirossian and many other concert artists. Thanks to these, her musical sensibility and advanced technique were shaped.Delphine combines her two passions. On the one hand teaching, where she transmits her knowledge and is enriched by the exchanges with her students at the Cité de la Musique and the Chopin Center. On the other hand, European Classical concerts which main goal is to raise awareness for humanitarian causes. For instance, she participated in the Festival des Présences Féminines where the forgotten composers Hélène de Montgeroult, Mel Bonis and Cécile de Chaminade were honored.

Her eclectic musical influences allow her to navigate between the classical world of Liszt, the film music of John Williams and the rock of Guns N’ Roses. Delphine is an artist who is constantly evolving through time, exploring new trends with great freedom. 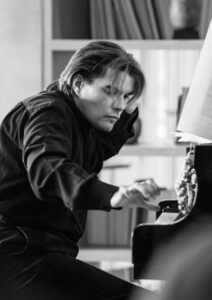 Nicolas Horvath began his music studies at the Académie de Musique Prince Rainier III de Monaco, and at the age 16, he caught the attention of the American conductor Lawrence Foster who helped him to secure a three-year scholarship from the Princess Grace Foundation in order to further his studies. His mentors include a number of distinguished international pianists, including Bruno Leonardo Gelber, Gérard Frémy, Eric Heidsieck, Gabriel Tacchino, Nelson Delle-Vigne, Philippe Entremont, Oxana Yablonskaya and Liszt specialist Leslie Howard. He is the holder of a number of awards, including First Prize of the Scriabin and the Luigi Nono International Competitions.
Nicolas Horvath is not only a rediscoverer of unknown or unjustly forgotten composers such as Moondog, Germaine Tailleferre, François-Adrien Boieldieu, Hélène de Montgeroult, Félicien David, Karl August Hermann or works unjustly forgotten such as Franz Liszt Christus or Claude Deussy’s La Chute de la Maison d’Usher… but also a music lover of our time. He has commissioned and premiered a vast repertoire from a very large number of composers (notably in 2014 from more than 120 composers for his Homages to Philip Glass project) and collaborated with leading contemporary composers from around the world, such as: Terry Riley, Alvin Lucier, Régis Campo, Mamoru Fujieda, Jaan Rääts, Alvin Curran and Valentyn Silvestrov.
Horvath has become noted for the organisation of concerts of unusual length, sometimes lasting over twelve hours, such as the performance of the complete piano music of Philip Glass at the Paris Philharmonie before a cumulative audience of 14,000 people, or the complete piano music for Erik Satie and his Vexations. In October 2015, he was invited to give the closing recital of the Pavilion of Estonia at the Universal Exhibition in Milan with a Jaan Rääts monographic program, the same year he gave at Carnegie Hall, the world premiere of the complete cycle of the 20 Philip Glass Etudes. And in May 2019, Nicolas had the honor of having been chosen by Philip Glass himself to perform live with him and 8 other pianists, his 20 studies at the Philharmonie de Paris.